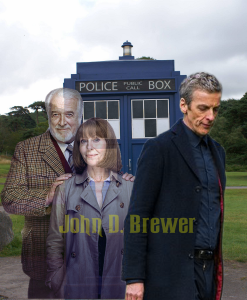 I know this will probably get the waterworks flowing, but it’s
one I had to share. The Doctor thinking of his two best friends.

With this week being one of recovering from the best conventions we have attended in the past at least 15 years, I’m a little behind the fast-paced news coming out surrounding Gallifrey. Just keeping up on the Twitterverse’s #galley hashtag has been a bloody chore in of itself! Expect the next week to be a daily roundup of everything connected to Who.

The first thing deserving mention, even above the convention itself, is the sad news that came to the Who world Tuesday evening through Twitter. The classic Who legend, Nicholas Courtney, aka The Brigadier, passed away peacefully at the age of 81. His last appearance in Doctor Who was in The Sarah Jane Chronicles last year in the two-part story Enemy of the Bane. Doctor Who Big Finish Audio Drama Executive Producer Nick Briggs said of his long-time friend: ‘I’ve known Nick for around 25 years and I am so sad that he has left us. I know that many of us will have such lovely memories of spending time with him. Our thoughts are with his wife Karen, his family and all of you who knew and loved him.”

We will miss you, Brigadier. You can now stand down Brig…job done, Earth protected. Watch an episode with him this week and do a salute, five rounds rapid. Splendid chap…all of him.