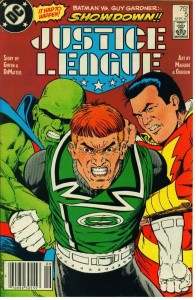 « Everybody Run! Aunt May’s Got a Gun!
Crossover Time! Arrow meets Doctor Who »